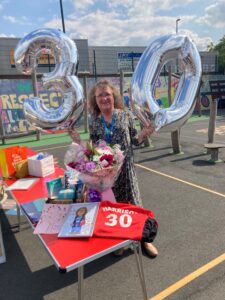 Pupils and staff at Djanogly Northgate Academy are saying farewell this summer to a long serving teaching assistant.

Sue Harrison has completed 30 years’ service at the school having started as a support assistant in 1991.

Sue said: “What I have most enjoyed about the job is supporting the children and working as part of a team.”

Sue progressed to become a special needs teaching assistant. During the last 10 years she has been working with Year 6 children.

Her most recent job role has been as the lead teaching assistant at Djanogly Northgate Academy, where she has concentrated on helping children in booster groups.

Sue has seen many changes over three decades including five headteachers and the growth of the school after it became an academy under Liz Anderson’s leadership, and she has many proud moments.

She explained: “My proudest moments include supporting a child who was at Level 2 in maths to reach Level 4. Another proud moment was when I was working with a Reading Rocks group that were so in tune with one another it was a joy to have discussions with them. The group knew exactly what was expected of them.”

Other memorable moments include dressing up as a lobster at the Under the Sea themed summer fair and an incident one Christmas when children were allowed to bring food from home for parties. Sue recalled: “We had a little boy who wanted to bring chicken in. He certainly did – it was a full frozen chicken with the wrapper still on!”

Sue has mixed feelings about retiring. She explained: “This has been my life for 30 years. It will be a wrench leaving but I will also be glad to have some time for me. I’m planning to travel around the UK and also visit my grandchildren in Germany. I want to start making my homemade greeting cards again. Not setting my alarm clock at 5.20am every morning will be a novelty for me!”

Liz Anderson, Chief Executive Officer, Djanogly Learning Trust, said: “I would like to thank Sue for her long standing service to Djanogly Northgate Academy – she has made a fantastic contribution over the years and I wish her all the very best for her retirement.”

Any cookies that may not be particularly necessary for the website to function and is used specifically to collect user personal data via analytics, ads, other embedded contents are termed as non-necessary cookies. It is mandatory to procure user consent prior to running these cookies on your website.