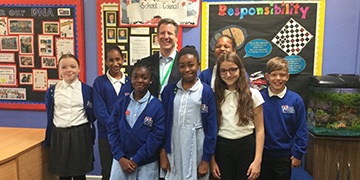 Djanogly Northgate Academy pupils are running a mock general election in the run up to the real one this week.

This week, there will be a final vote during an assembly on Wednesday, December 11th, for the best political party across the school.

Pupils aged from aged five to 11-years-old, have been involved in forming their own political parties focussed on the issues they care about.

In groups of three or four, they have also written manifestos and held mock hustings with each class in the school voting for the most persuasive party and team presentation.

Richard Jackson, Head of School, Djanogly Northgate Academy, said: “We’ve had a fantastic response from our pupils who feel strongly about a range of different issues and they have been expressing that during a series of class hustings.”

He explained: “Our mock general election helps prepare our pupils to play an active part in society, aids their understanding of the democratic process and inspires them to develop ideas to improve the world around them.”

Djanogly Northgate Academy, which is Ofsted graded ‘good’, serves a diverse community. There are 32 languages spoken in school; for a large portion of pupils, English is not their first language.

Pupils’ campaign ideas have covered a range of topics including lifestyle issues such as encouraging children to exercise more and to eat more healthily, having more recycling bins in school and reducing plastic in pack lunches, doing more to help the homeless and raising taxes amongst higher earners to help public services such as the NHS.

This website uses cookies to improve your experience while you navigate through the website. Out of these cookies, the cookies that are categorized as necessary are stored on your browser as they are essential for the working of basic functionalities of the website. We also use third-party cookies that help us analyze and understand how you use this website. These cookies will be stored in your browser only with your consent. You also have the option to opt-out of these cookies. But opting out of some of these cookies may have an effect on your browsing experience.
Necessary Always Enabled
Necessary cookies are absolutely essential for the website to function properly. This category only includes cookies that ensures basic functionalities and security features of the website. These cookies do not store any personal information.
Non-necessary
Any cookies that may not be particularly necessary for the website to function and is used specifically to collect user personal data via analytics, ads, other embedded contents are termed as non-necessary cookies. It is mandatory to procure user consent prior to running these cookies on your website.
SAVE & ACCEPT
Translate