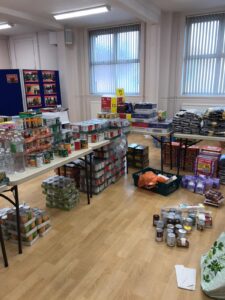 Families who are struggling financially during the coronavirus pandemic are being lent a helping hand.

Djanogly Learning Trust, whose head office is based in Sherwood, Nottingham, has joined forces with the Salvation Army to distribute food and toiletries parcels to primary and secondary pupils and their families living on the breadline.

The donations are being given to low-income families including those not eligible for benefits where parents are continuing to work during the pandemic or are furloughed.

Liz Anderson, Chief Executive Officer, Djanogly Learning Trust, said: “We are delighted to join forces with the Salvation Army and support pupils and their families in our community who are struggling financially due to the pandemic.”

She added: “The scheme is helping those on low breadline wages, who may not be eligible to claim benefits and free school meal vouchers but are struggling, as well as those who have lost their jobs and are caught in the period of no wages but waiting for universal credit applications to be approved. It’s very much individualised with those in need being identified by our school family support workers on the ground.”

The number of schools in Nottingham being helped by the Salvation Army has grown from three to 10 and the scheme is continuing until Easter, when it will be reviewed.

The food packages contain items such as bread, cereal, eggs, fruit, honey, jam, milk and orange juice and the families are being identified by the schools’ family support workers and pastoral teams.

Shanna Regan, from the Pastoral Team at Djanogly City Academy, said: “We are extremely grateful that families within our school community are able to benefit from this scheme with the Salvation Army. Given we are in such difficult times, it is vital that we go that little bit further. The boxes are full of good quality produce and we have received so much positive feedback and gratitude from our families for the support.”

Sarah Saxton, Family Support Worker at Djanogly Sherwood Academy, added: “These packages have supported the children and their families by helping to reduce the stress and worry about how they might eat for that week. The scheme has also had a positive impact by helping some families avoid going into debt or further debt. All families have been so grateful for the support.”

She added: “Some families have also received nappies and other baby items which are very expensive to buy and difficult when you are struggling financially. The hygiene packs have been a great help too.”

One parent said: “I would like to thank the Salvation Army for the much needed support with the food parcels, which are well put together and supply healthy food for my son. I appreciate their help in many ways and am truly grateful for all that they have done. Thank-you from our family.”

Another parent added: “The food parcels have been a great help to me and my kids due to not having the best of income to support us. They have helped me maintain a good balance of meals and to cook home-made rather than ready meals.”

This website uses cookies to improve your experience while you navigate through the website. Out of these cookies, the cookies that are categorized as necessary are stored on your browser as they are essential for the working of basic functionalities of the website. We also use third-party cookies that help us analyze and understand how you use this website. These cookies will be stored in your browser only with your consent. You also have the option to opt-out of these cookies. But opting out of some of these cookies may have an effect on your browsing experience.
Necessary Always Enabled
Necessary cookies are absolutely essential for the website to function properly. This category only includes cookies that ensures basic functionalities and security features of the website. These cookies do not store any personal information.
Non-necessary
Any cookies that may not be particularly necessary for the website to function and is used specifically to collect user personal data via analytics, ads, other embedded contents are termed as non-necessary cookies. It is mandatory to procure user consent prior to running these cookies on your website.
SAVE & ACCEPT
Translate